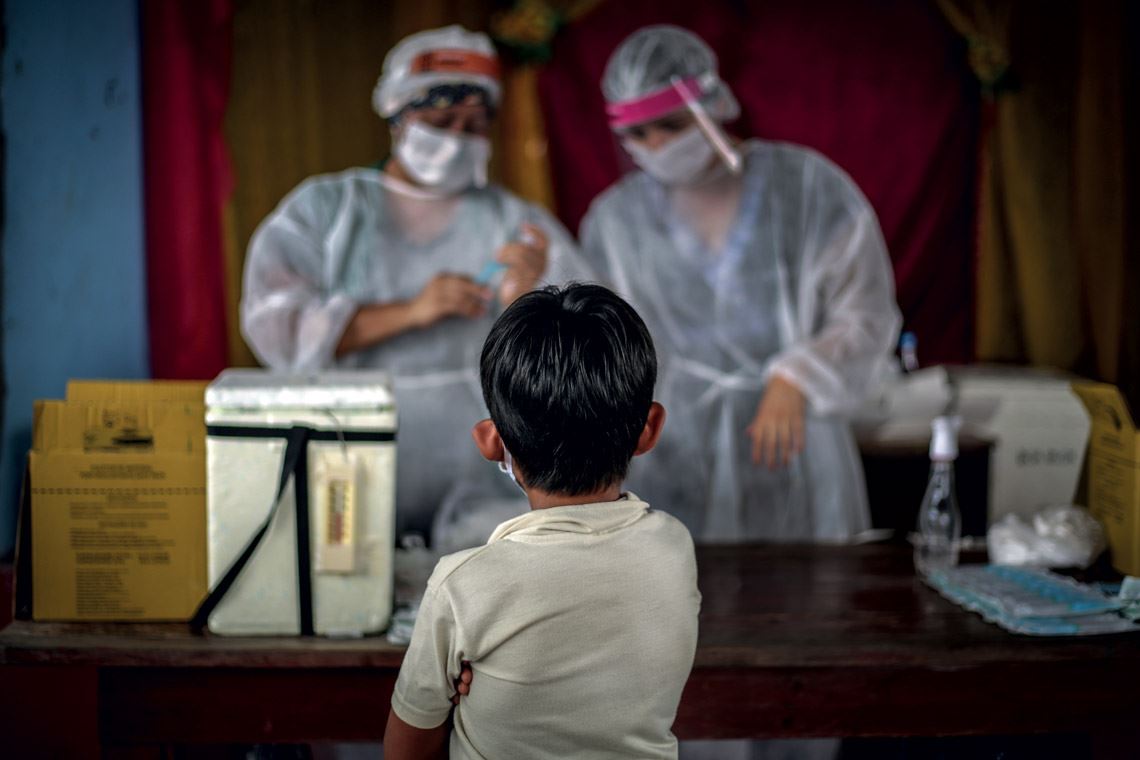 Confirmed cases of COVID-19 in children and adolescents range from 0.5% to about 3.5% of total infections worldwide, making this age group by far the least affected by the pandemic. But a small number of boys and girls have experienced serious health problems that have been linked to infection by the SARS-CoV-2 virus. These severe and unexpected clinical symptoms, caused by an intense inflammatory response in blood vessels and several organs—including the respiratory, cardiovascular, and gastrointestinal systems—have added to a growing number of unanswered questions about the effects of the pandemic on populations younger than 20 years old. Children and teenagers, whose role in spreading the novel coronavirus is still unclear, appear to have a lower risk of being infected and of developing severe forms of COVID-19.

But doctors in the UK, Italy, and the US recently reported cases of a pediatric inflammatory syndrome most likely linked to the coronavirus pandemic. On May 19, the Brazilian Society of Pediatrics (SBP), the Brazilian Ministry of Health, the Brazilian Society of Rheumatology and the Pan American Health Organization (PAHO) issued a joint alert about this acute and potentially fatal condition. Doctors say it appears to be a late response to the infection.

Read:
– The reality of data
– Natural guests
– Brazil begins testing
– Predicting the course of epidemics
– Sergio Machado Rezende: Together against COVID-19
– Restoring trust
– Calculating in the dark
– The size of the pandemic
– Research during the quarantine

“We have also had cases like this in Brazil,” says pediatrician Marco Aurélio Palazzi Sáfadi, a professor at the School of Medical Sciences at Santa Casa São Paulo (FCM-SCSP) and head of the Pediatric Infectious Disease Service at Sabará Children’s Hospital, who coauthored the SBP alert. “We don’t have official data yet, but I’ve received reports from colleagues in São Paulo and other states who are monitoring cases of children infected with SARS-CoV-2 and who have presented with this syndrome. The clinical picture looks very much like Kawasaki disease. But some children, in addition to symptoms of this syndrome, have also presented with an intense inflammatory reaction and shock.”

Kawasaki disease, a relatively rare illness, is a type of systemic vasculitis (inflammation of blood vessel walls) of unknown cause. It was first described in 1967 by Japanese pediatrician Tomisaku Kawasaki. It most frequently occurs in children up to 5 years of age and has a high incidence in North Korea and Japan, where more than 100 cases per 100,000 children occur annually. As there are no specific tests to confirm the disease, it is diagnosed based on clinical and laboratory findings such as persistent fever, conjunctivitis, rash, swelling of the tongue and lips, and redness of the palms and soles. The disease is curable but can be fatal if not treated properly. Aneurysms in the coronary artery are its most serious complication. In Brazil, epidemiological data on Kawasaki disease is sparse as it is not a reportable illness. 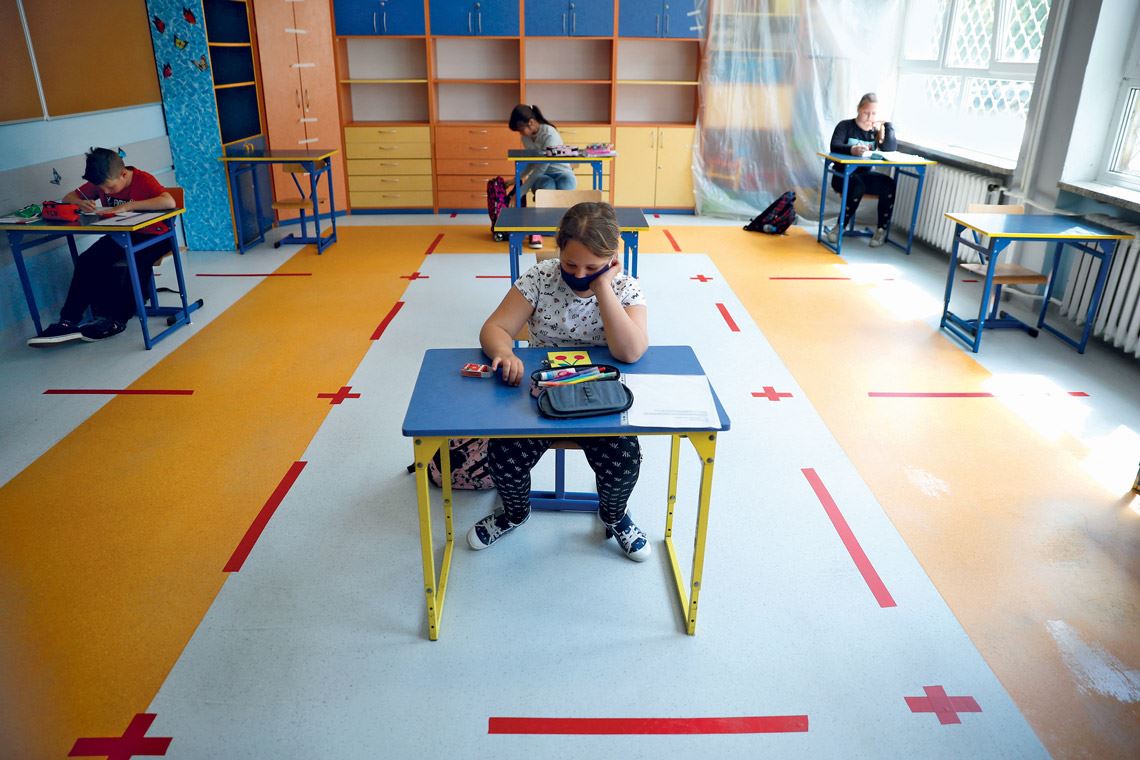 Children sit spaced apart after returning to school in the wake of the pandemic in Warsaw, PolandReuters / Fotoarena

Following the outbreak of the novel coronavirus pandemic, the first alert about cases of children with a multisystemic syndrome similar to Kawasaki’s disease was issued by British pediatricians in late April. Around ten patients aged 4 to 17 years old had a systemic inflammation accompanied by high and persistent fever, abdominal pain, and gastrointestinal symptoms (vomiting and diarrhea), in addition to heart inflammation. Some tested positive for COVID-19; others did not. At the time, a linkage with the SARS-CoV-2 virus could not be unequivocally established.

But similar cases began to pop up in other countries. As of May 12, the New York State Department of Health had identified 102 patients with similar symptoms, many of whom had RT-PCR evidence of viral RNA and most of whom had tested positive for SARS-CoV-2 infection by serologic assay, suggesting the symptoms were a late effect from coronavirus infection. RT-PCR and serological tests indicate respectively whether a person is currently or has been previously infected by the virus.

Doctors in the General Pediatric Unit of Hospital Papa Giovanni XXIII, in the Italian city of Bergamo, then the epicenter of Europe’s pandemic, published a paper in The Lancet on May 13 in which they describe 10 putative cases of the disease, seven in boys and three in girls. The children had been hospitalized with Kawasaki-like illness between February 18 and April 20. The authors found that the number of cases was 30 times greater than in the previous 5 years.

Before the epidemic broke out, the hospital typically treated only about one case of Kawasaki disease every three months. According to the hospital, the increase cannot be attributed to a higher number of hospitalizations; in fact, the facility was admitting six times fewer pediatric patients than in the pre-pandemic period. Of the 10 children in Italy, 8 tested positive for SARS-CoV-2 antibodies. All patients described in the study survived, but had more severe conditions than children diagnosed with Kawasaki’s disease at the hospital in the previous five years. At an average 7.5 years of age, they were also older than the age when the illness normally develops—Kawasaki disease typically occurs at around 3 years old.

Pediatrician Lorenzo D’Antiga, director at the Pediatric Transplantation Unit at Hospital Papa Giovanni XXIII, who coauthored the paper, says that children in the study had a severe form of Kawasaki disease that is triggered by SARS-CoV-2 infection. Following publication of the paper in The Lancet, another 10 cases of the disease were admitted to the hospital. A new article is due to be published shortly. “It remains a rare disease. We estimate it affects one child out of every thousand infected by the virus,” D’Antiga said in an interview with Pesquisa FAPESP. “But before there was one case for every 100,000 children. It is very important that pediatricians are able to recognize Kawasaki disease and treat patients appropriately with immunoglobulin, steroids, and aspirin. If they don’t get the right treatment, they can die.” At least three deaths of pediatric patients with the syndrome have been reported in the US and one in the UK.

Pediatrician Marco Aurélio Sáfadi, who chairs the Scientific Department of Infectious Diseases at the Brazilian Society of Pediatrics, says that pediatric wards in Brazilian hospitals have been relatively quiet. “Our experience—and that of other countries—shows that the vast majority of children and teenagers recover well from infection with COVID-19. Some cases are serious, but these have been few and we have not had any deaths so far in two hospitals I have monitored closely.”

Experts still don’t know why children and teens account for such a small fraction of total infections, and an even lower percentage of serious cases, compared to adults and the elderly. “Several theories have emerged, but there is no definitive evidence in the literature as to why children are spared from the most serious forms and have a lower risk of complications,” says Sáfadi.

One of the most prevalent theories involves virus receptors in human cells. Scientists already know that SARS-CoV-2 infects people via the angiotensin-converting enzyme 2 (ACE2) receptor, which can be found in the lungs, digestive system, kidneys, endothelium, and other tissues. “For some reason these receptors do not line up and express themselves in children the same way they do in adults,” says Sáfadi.

This could also explain why some children only have gastrointestinal symptoms, with no initial manifestation of the disease in the respiratory system, as described in a study published in May in Frontiers in Pediatrics, based on five cases of children hospitalized at Wuhan Children’s Hospital in China.

In São Paulo City, doctors and researchers at FCM-SCSP and the University of São Paulo (USP) published a case report on a 10-year-old girl infected with SARS-CoV-2, without comorbidities, who presented with hematuria (blood in the urine) but only mild respiratory symptoms. “Blood in urine is a more frequent finding in adults with severe symptoms of COVID-19,” says pediatrician Flávia Jacqueline Almeida of FCM-SCSP, who coauthored the report. “In this case, the girl had had fever for four days and hematuria for three days, urinating pure blood. Apart from that she had experienced no other symptoms.”

Almeida believes pediatricians should take particular note of this case. “Blood in urine should be a red flag for potential infection with SARS-CoV-2,” she says. Almeida and other colleagues at Santa Casa are testing children admitted to emergency departments who are asymptomatic or have symptoms of the common flu to investigate the prevalence of COVID-19 in this population. The reason why many children who contract the virus are asymptomatic is another mystery to be solved. Scientists are also looking to understand what role younger children play in the transmission of SARS-CoV-2. Knowing this has become all the more important now that many countries are lifting lockdowns and reopening, or considering reopening, schools.

A study published by University College London (UCL) on May 24 in the preprint repository medRxiv, which is still awaiting peer review, found that children and young people up to 20 years old have 56% lower odds of infection with COVID-19. The findings were from a systematic review of 18 studies out of 6,332 related papers. The authors conclude from their findings that children play a lesser role in the transmission of SARS-CoV-2 because they have a lower risk of being infected. UCL notes, however, that the study provides no information on whether infected children can spread the virus.

Scientific articles
VERDONI, L. et al. An outbreak of severe Kawasaki-like disease at the Italian epicentre of the Sars-CoV-2 epidemic: An observational cohort study. The Lancet. May 13, 2020.
XIAOFANG, C. et al. Clinical characteristics of 5 Covid-19 cases with non-respiratory symptoms as the first manifestation in children. Frontiers in Pediatrics. May 12, 2020
VINER, R. et al. Susceptibility to and transmission of Covid-19 amongst children and adolescents compared with adults: A systematic review and meta-analysis. medRxiv. May 24, 2020.