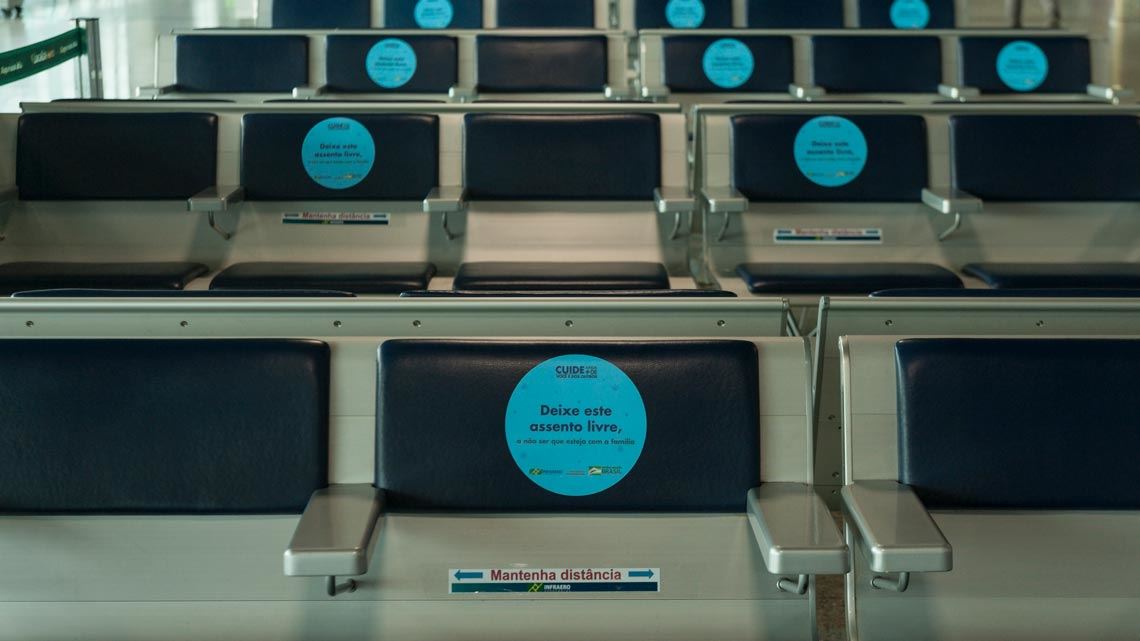 Signs advise travelers to maintain distance from one another at Congonhas Airport, São Paulo

Almost 80 days after closing their doors because of the COVID-19 pandemic caused by the SARS-CoV-2 virus, shopping centers and high streets in São Paulo were finally given the green light to partially reopen in mid-June. To be more precise, they were given an amber light: corresponding to phase 2 of São Paulo’s Reopening Plan, which aims to gradually lift quarantine measures and was announced by the state government on June 1. After many ups and downs, with reopening at one point postponed due to increasing numbers of infections and hospitalizations, the capital is finally seeing some important indicators, such as Intensive Care Unit (ICU) occupancy rates and total new cases, leveling off or falling. These are some of the elements considered in the five phases of the state plan, which serves as a reference for municipalities statewide.

As in other cities around Brazil and the world, there has been pressure to end the lockdown in São Paulo both from the public, who are eager to regain some normality in their day-to-day lives, and from sectors of the economy impacted by the closures. Buenos Aires, the capital of neighboring Argentina, is also lifting restrictions in phases, and in June began allowing residents to exercise in parks between 8:00 p.m. and 8:00 a.m. After being closed for almost three months, the number of runners returning to the parks far exceeded expectations—and the government considered reversing its decision.

The phased approach based on social and health indicators has been popular worldwide, both for increasing and relaxing restrictions on urban movement. In Brazil, Rio Grande do Sul was among the first to adopt the model, formulated jointly by epidemiologists and economists. It includes 11 health indicators, divided into two groups, one to measure the spread of the disease and the other hospital capacity. São Paulo’s plan uses five indicators to measure these two factors, as well as a third: testing capacity and contact tracing.

The nine states in the Northeast of Brazil have created a risk matrix that follows a similar logic, with three stages for controlling the pandemic. A traffic light scale is scored from 0 to 100, where green (0–50) allow rules to be relaxed, amber (51–80) means on alert, and red (81–100) requires a strict lockdown. The score is calculated based on the capacity of the healthcare system, how fast the disease is spreading, and adherence to social distancing rules, in relation to the geographic layout of the municipalities. 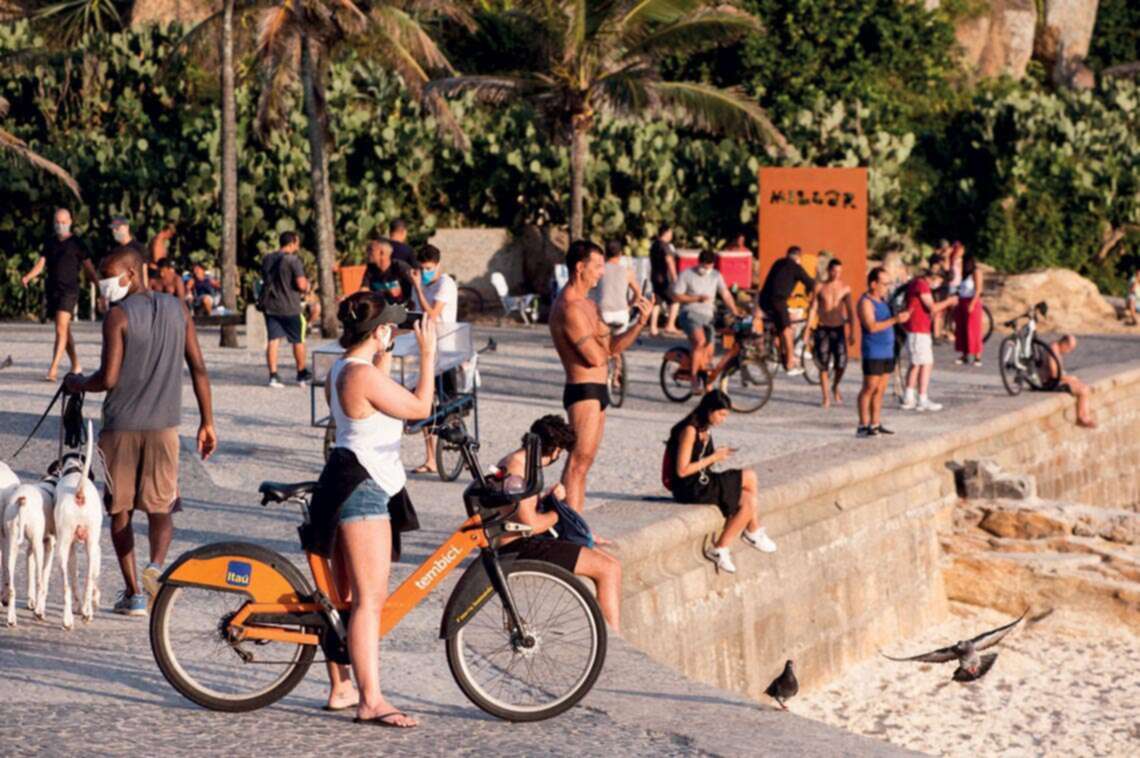 Reopening too soon
Academics monitoring how the pandemic unfolds, however, fear that the current relaxation of lockdown protocols in Brazil began prematurely. When the process was started between the end of May and the beginning of June, epidemiological curves were not clearly falling. “We are one of the few countries that chose to loosen measures at a time when cases and deaths were increasing. This is reckless and could accelerate the epidemic even more,” says physicist Domingos Alves, from the Health Information and Informatics Center (CIIS) at the University of São Paulo’s Ribeirão Preto School of Medicine (FMRP-USP).

A technical note published in June by the group COVID-19 Brasil, formed of scientists from several Brazilian universities that are studying the pandemic, criticized the relaxation of social isolation in the state of São Paulo. “Although it proposes robust criteria for resuming economic activities, the plan thoughtlessly (and politically, without substantiated criteria) selects which municipalities could fit into each reopening phase,” says the document. It goes on: “In the month of June, and possibly in July, the epidemic will peak in the state.”

Alves, a member of COVID-19 Brasil, maintains that the lockdown should only be ended after the number of COVID-19 cases, hospital admissions, and deaths has stabilized or fallen for at least two weeks. “This is one of the main criteria suggested by the WHO [World Health Organization] for lifting isolation measures. Another is the country’s ability to test the population en masse, something that hasn’t happened here either. Our healthcare system has not yet proven capable of detecting, testing, isolating, and treating all cases, let alone tracing contacts.”

The São Paulo state government has defended the criteria adopted in its Reopening Plan. “Every guideline in the plan was written with public health in mind, with a short- and medium-term vision designed to save lives,” said State Governor João Doria during an interview with the Coronavirus Contingency Center on June 26.

On the same occasion, the center’s executive secretary, João Gabbardo dos Reis, responded to news reports comparing the rolling mortality curves of June 3 and 13. “A hasty correlation has been drawn between a small increase in the rolling average of this curve and aspects related to loosening lockdown. There is no relationship between one thing and the other,” he said. “These assessments of very short periods are highly premature. We need to look at the context and all of the information available to us.”

According to the WHO, a safe recovery process that prevents the risk of a second wave of SARS-CoV-2 should also include strategies for reducing the risks of outbreaks occurring in health facilities and nursing homes. The organization also recommends preventive measures in workplaces, schools, and other essential services, and that governments manage the danger of new cases arriving from overseas.

Infectious disease specialist Celso Granato, clinical director of the Fleury Group and a professor at the Federal University of São Paulo (UNIFESP), agrees that resuming economic activities in São Paulo was a risky move, but argues that it needed to be done. “We have to return to some sort of normality. We have a plan for easing the lockdown in the state; our biggest challenge will be following it,” he says. “For it to work safely, we need the best possible data on new cases, deaths, and hospitalizations. That way, we will know if we need to take a step forward or two steps back.” Granato also highlights the importance of continuing with preventive measures, including the use of face masks, frequent hand washing, and social distancing.

One of the most important indicators being monitored by countries when deciding whether the epidemic is under control and containment rules can be loosened is the effective reproduction number, known by the acronym Re or Rt, which indicates the infection’s contagion potential at any given moment (see report). “An Re above 1 means exponential growth of the disease,” explains physician and researcher Ricardo Schnekenberg, a clinical neuroscience PhD student at the University of Oxford and a member of the Imperial College team, both in the United Kingdom. “To end lockdown, the Re should be less than 1,” he says. One of the world’s leading centers for epidemic studies, Imperial College has been systematically analyzing the novel coronavirus pandemic and reporting the effective reproduction number of various locations.

In Europe, which started easing quarantine measures in May, the Re has been closely monitored to help prevent a second wave. “Germany has maintained an Re between 0.85 and 0.95. When it gets close to 1, they close down a little bit more,” comments Schnekenberg.

The effective reproduction number is not easy to calculate. “The Re takes many factors into account, so it is not always a precise indicator. Anyone who can predict it accurately, like Imperial College, is doing a good job. But not many can,” says epidemiologist Paulo Lotufo, from USP’s School of Medicine. He highlights two indicators that should be monitored in Brazil: excess deaths and the healthcare available.

The former is a comparative analysis of mortality records from the last five or six years in a given location (city, state, country), used to determine the average number of deaths each week and the standard deviation for the period. “During a highly contagious and lethal epidemic, you can monitor how much the average number of deaths has been exceeded in a week or month. This year, there was a significant increase in deaths from mid-March onward. Many more than were being attributed to COVID-19,” he reports. This indicator includes deaths from pneumonia and cardiovascular problems. Mortality rates returning to the levels of previous years would be a green light to think about resuming day-to-day life, explains Lotufo.

The second factor Lotufo recommends is the number of hospital beds available. The occupancy rate of ICU beds should be between 75% and 85%, at most. Above this level, the quality of healthcare declines due to system overload. The researcher also warns that predictions about when the infections curve will peak are imprecise. “In such a rapidly changing situation, this is something you only really know after the fact.”

Alves, from FMRP-USP, agrees. “The discourse among those in charge of resuming activities is that we have reached a plateau [a prolonged peak that takes time to fall], but that has not happened. Reopening the economy while the curve is still growing could damage it even further,” points out the expert.

According to pulmonologist Carlos Carvalho, head of the São Paulo state government’s Coronavirus Contingency Center, deaths were expected to rise in June, but the total number was lower than estimated. “We predicted that the numbers would increase. But, if we look at the predicted mortality curve, the actual number of deaths was within the average, and it is close to the lower side of the average,” he declared in an interview with the newspaper O Estado de S.Paulo.

A study by the Brazilian Center for Physics Research (CBPF), Fluminense Federal University (UFF), and the University of Brasília (UnB) shows that lockdown easing should only occur gradually, “one month after we hit the peak, to avoid a second wave of cases.” Based on a mathematical model called SIRASD, which stands for susceptible, infected, recovered, asymptomatic, symptomatic, and dead, the study took into account the behavior of two population groups during the pandemic, one composed of people able to self-isolate and the other of members of the informal economy who continued to work.

In addition to the fact that it is difficult to establish when the infection rate will peak, the lifting of quarantine measures should not be irreversible. This is the assessment of Deisy Ventura, coordinator of the PhD program in global health and sustainability at USP’s School of Public Health. Since a vaccine is still some way off and our knowledge of the virus has been growing little by little, she believes that further periods of social isolation will be necessary.

Ventura lists three elements to consider when planning containment strategies and eventually lifting restrictions. The first—and one of the most challenging—is that cities should thoroughly examine the local conditions and population. “There are a range of possible restrictive and public health measures. The debate has revolved around ‘lockdown,’ but it would be more correct to speak of quarantine measures, with more or fewer restrictions on activities,” she says.

The second is to monitor the number of cases and the capacity of the healthcare system. The third, to which the success of any restrictive measures is closely linked, is risk communication, a key factor in ensuring the population follows official guidance. Clear communication encouraging people not to let their guard down and to be aware of the needs of different social groups is included in a document written by the WHO after the international emergencies related to H1N1 in 2009 and Ebola in 2014. “Measures can only be lessened if the public has confidence in the authorities,” says Ventura. “This is fundamental to successfully controlling COVID-19.”

Scientific article
PIRES, M. A. et al. What is the potential for a second peak in the evolution of Sars-CoV-2 in Brazil? Insights from a Sirasd model considering the informal economy. ArXiv. June 3, 2020.