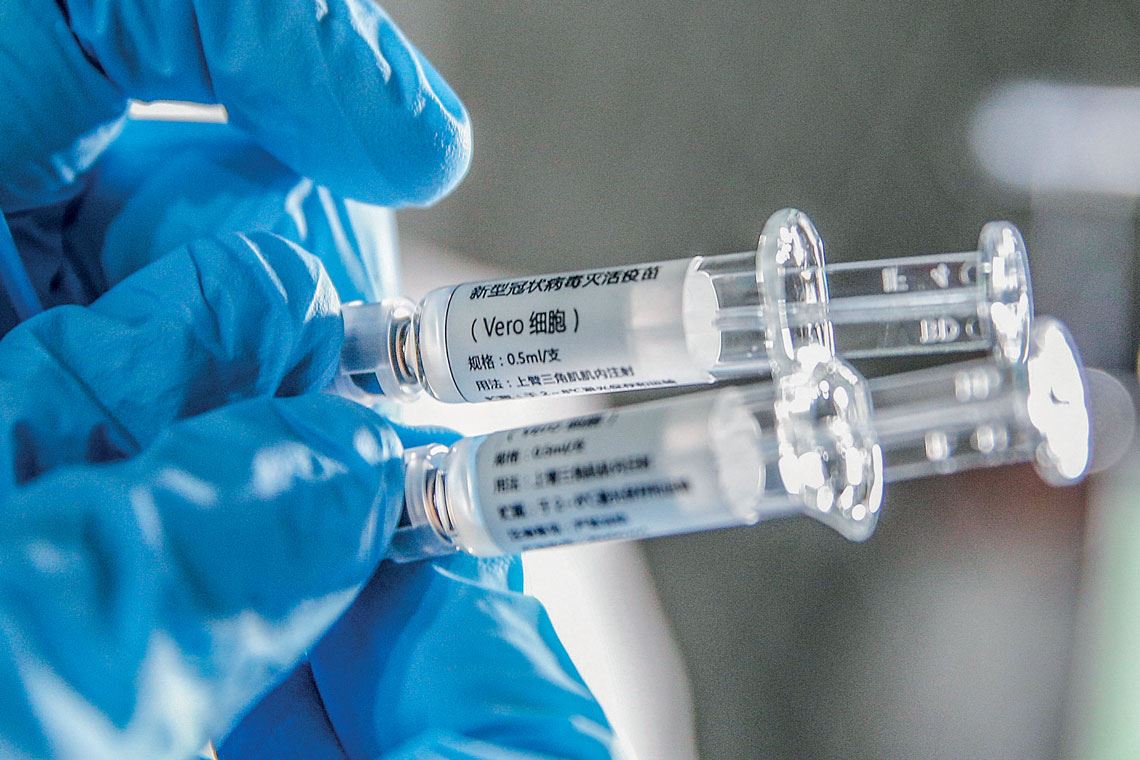 Vaccine made by Chinese company Sinovac, which the Butantan Institute will test in Brazil

The two biggest vaccine manufacturers in Brazil—the Butantan Institute in São Paulo and the Immunobiological Technology Institute (Biomanguinhos) in Rio de Janeiro—are working on two simultaneous fronts to ensure the country’s population will have access to a vaccine against COVID-19. The first and most urgent is to transfer vaccine production technology developed by companies in other countries that are at an advanced stage of effectiveness testing in humans. It is probably a shorter path than the second approach, which is for national research centers to develop new vaccines against the disease based on their experience fighting other diseases over the last few decades.

On June 11, Butantan announced that it will participate in human testing, known as phase 3 trials, of a vaccine candidate manufactured by the Chinese company Sinovac Biotech, based in Beijing, with an agreement to transfer the technology needed to produce the vaccine in Brazil if the clinical trials are successful. Ricardo Palacios, clinical director of the institute, expects the Brazilian Health Regulatory Agency (ANVISA) and the Brazilian Commission for Research Ethics (CONEP) to approve the test plan in July, which will involve 9,000 volunteers at an estimated cost of R$85 million. If the formulation proves effective at generating antibodies that neutralize SARS-CoV-2—the virus that causes COVID-19—and the project follows the desired schedule, distribution in the country could begin in June 2021, although at first the São Paulo–based Institute would share responsibility for manufacturing the vaccine.

“There will probably be several generations of COVID-19 vaccines,” says Palacios. “The first generation, which we have to make viable as soon as possible, will be a response to a public health emergency, aiming to prevent the disease, especially severe cases, and prevent hospitalizations.”

Called Coronavac, the Sinovac vaccine candidate that Butantan will test and potentially produce consists essentially of the coronavirus itself, multiplied in Vero cells from monkeys as is common in this field of science, and then purified and chemically inactivated. It shall therefore not cause the disease, instead simply provoking the production of antibodies against the virus. The formulation contains an aluminum-based adjuvant to amplify its effect.

In studies, two doses protected eight Rhesus monkeys, according to an article by researchers from Sinovac published in Science on May 6. Three weeks after vaccination, SARS-CoV-2 was introduced into the animals’ lungs, and none of them developed the infection.

On June 13, the Chinese company announced the results of its phase 1 and 2 clinical trials, which assessed the safety and effectiveness of the formulation, with 143 and 600 healthy volunteers respectively. According to the report, no adverse effects were observed and the vaccine induced the production of antibodies after 14 days in more than 90% of participants. 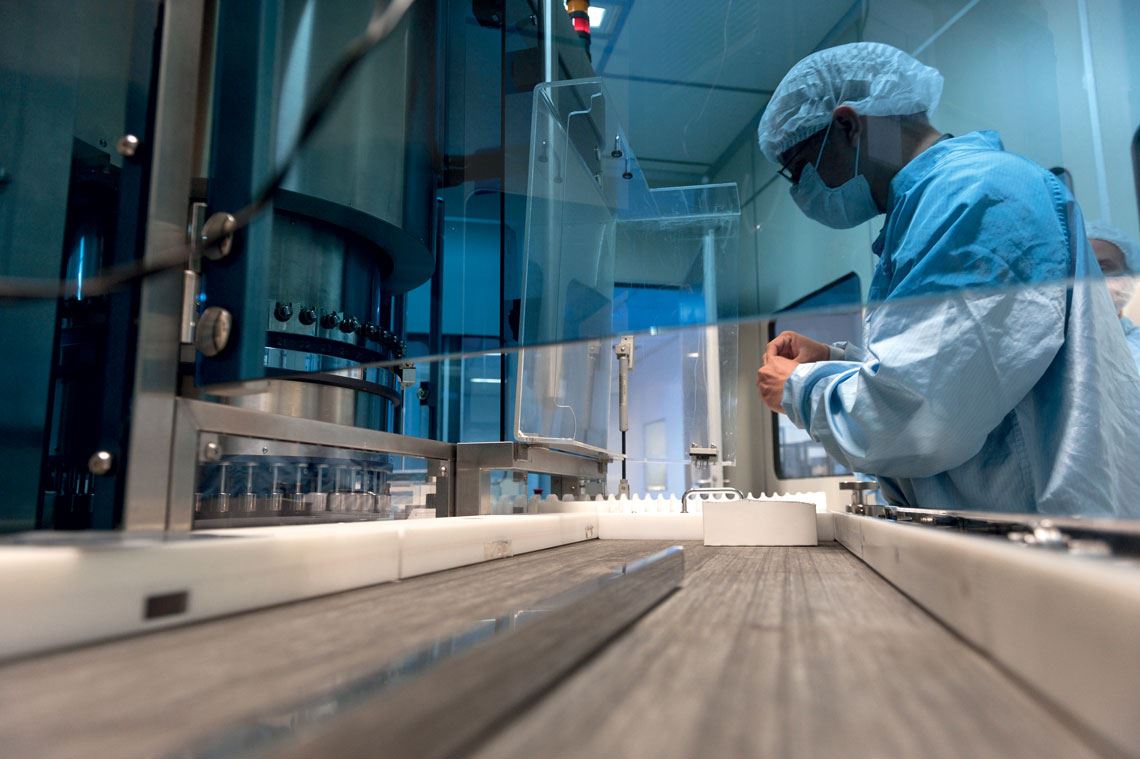 Visual inspection on the production line at BiomanguinhosLéo Ramos Chaves

In Brazil, according to Palacios, there will be two tests to evaluate the vaccine, both double-blind trials, where researchers will only find out which participants received the actual vaccine and which the placebo when analyzing the results. The nearly 9,000 people taking part in the study will receive two doses of the formulation, with an interval of two weeks between each dose, and will be split into two age groups to evaluate difference in antibody production. They will also be monitored for the following year, to establish the duration of the immunity. The antibody tests will be carried out in Brazil and China.

The directors of Sinovac and Butantan already knew each other, with both participating in the Developing Countries Vaccine Manufacturers Network (DCVMN), comprised of 41 manufacturers from 14 countries. They began discussing the topic and exchanging technical information via videoconferences in early May. Sinovac’s new vaccine was advancing rapidly because the company took advantage of its existing production structure for the Severe Acute Respiratory Syndrome (SARS) vaccine, which had reached phase 1 clinical trials. The research was suspended in 2004 when cases of this disease, caused by a virus very similar to SARS-CoV-2, started to become much less common.

When announcing the partnership with the Chinese company, Butantan director Dimas Covas noted that its vaccine candidate is produced with a technique that the São Paulo–based institute already uses to make rabies and dengue vaccines. He says its production structure could therefore be “quickly adapted” if the tests prove successful, to produce up to 15 million doses per month.

“Having a vaccine sooner, even if the effectiveness is only reasonable, is better than not having any vaccine at all,” says Maurício Zuma, director of Biomanguinhos. In his view, only a vaccine—or an effective drug, but none have yet been identified or created—would reassure the world at this point in time. Public expectation is high, due to media and news articles with little real understanding of how the scientific process works: “It may seem like a vaccine is close, but it is unlikely that one will be ready before next year.” He adds: “Even formulations with a high potential, which have already begun clinical trials, could prove ineffective at any time.”

According to Zuma, Biomanguinhos, which is part of the Oswaldo Cruz Foundation (FIOCRUZ), is analyzing the technical and economic feasibility of various COVID-19 vaccines under development—and has already signed confidentiality agreements with manufacturers from China, Israel, and England—to aid the Brazilian Ministry of Health in its choice of which vaccines should be produced in Brazil.

If a candidate is successful, production in Rio could start “quickly, with capacity for 40 million doses per month,” he said in an interview with the Folha de S.Paulo newspaper. Such a high rate of production, however, would require new shift patterns and operational schedules. The institution is also working on its own vaccines: one is being developed in Rio and another by a FIOCRUZ team in Belo Horizonte (see report).

On June 2, the Federal University of São Paulo (UNIFESP) announced that ANVISA had approved plans to test a vaccine developed by a research group from the University of Oxford, UK. The next day, CONEP approved the phase 3 clinical trial, which involves the participation of 1,000 volunteers in São Paulo and another 1,000 in Rio de Janeiro, to be run by the D’Or Institute of Research and Teaching (IDOR) as a complement to trials being performed in the UK with 10,000 participants. 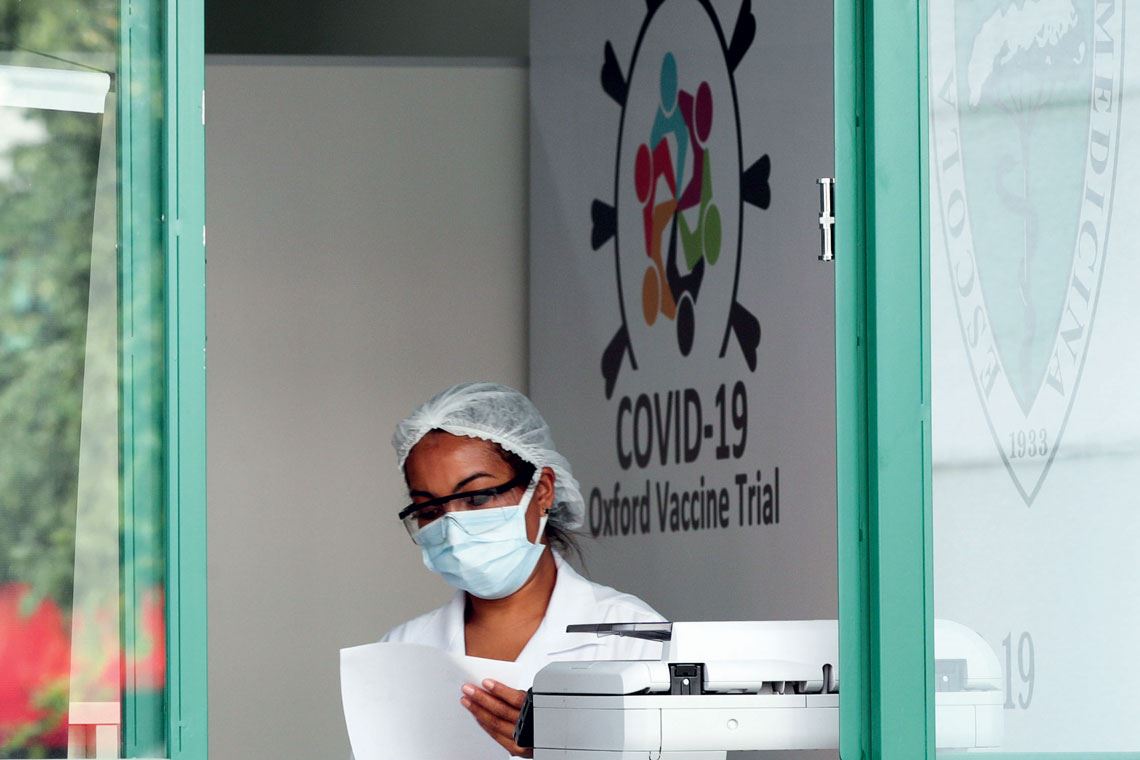 In April, the University of Oxford signed a contract with British pharmaceutical company AstraZeneca, based in Cambridge, to increase the scale of production, test on humans, and produce and distribute the vaccine if the results prove satisfactory. The company received US$1.2 billion from the US government to accelerate the project.

At the end of June, Brazil’s interim Minister of Health, Eduardo Pazuello, announced the imminent signing of a contract for Biomanguinhos to produce this vaccine in the country.

Initially called ChAdOx1 nCoV-19 and later AZD1222, the Oxford vaccine uses an adenovirus as a vector, modified to carry a gene that induces the production of a surface protein in the SARS-CoV-2 virus and stimulates the creation of antibodies, mainly type G immunoglobulins (IgG). As a result, the organism is then able to fight off the virus if it is infected.

The vaccine prevented pneumonia caused by the novel coronavirus in all nine Rhesus monkeys used in an experiment, according to an article by researchers from the University of Oxford and the US National Institutes of Health (NIH), published as a preprint on the bioRxiv repository on May 13. Other researchers from the US and UK, however, contested the results and noted that the untreated animals had the same level of protection against the virus as those who were given the vaccine.

Phases 1 and 2 of humans trials, the first of which is designed to measure safety and the second effectiveness, began at medical centers in southern England in April, with approximately 1,100 healthy volunteers aged 18–55.

For the following stages, immunologist Andrew Pollard, who leads the study at the University of Oxford, began planning tests on a larger group of people, as well as groups in other countries, in accordance with the approval requirements of such a product. At the beginning of May, he called his former colleague, Brazilian infectious disease specialist Sue Ann Costa Clemens, head of the Institute of Global Health at the University of Siena, Italy, and consultant to the Bill and Melinda Gates Foundation, and asked for help finding research centers interested in testing the vaccine in Brazil, one of the countries with the most cases of COVID-19 in the world. Clemens contacted her former professors at UNIFESP, where she had studied.

UNIFESP infectious disease specialist Lily Yin Weckx was interested in the possibility of participating in the trials and quickly sought to obtain internal approval. “We performed a miracle in just one month,” she says, referring to the rapid approval of the testing plan by the university’s Research Ethics Committee. According to Weckx, the agreement reached with the University of Oxford is limited to participation in the clinical trials, with no mention of production in Brazil or purchase priority. When asked, she declined to detail the testing plan, which she intends to start in June.

Usually, manufacturers pay universities to test their drug candidates. In this case, however, the trials in São Paulo will be funded by the Lemann Foundation, at an undisclosed cost, and those in Rio de Janeiro by the D’Or Institute, which is providing R$5 million, according to its president, Fernanda Tovar Moll.

“Agreements to test vaccines produced in other countries should guarantee Brazil access to the final product, so that the country’s data are not only used to validate a vaccine that might take a long time to arrive here, if it ever does,” comments Palacios.

These initiatives are supported by optimistic speculation that it is possible to develop a new vaccine in less than 10 years, the average time taken, and to produce hundreds of millions of doses in less than two years. Even if the projects progress as hoped, “it will be very difficult to fully eradicate COVID-19,” warns Palacios. “The virus is here to stay.”